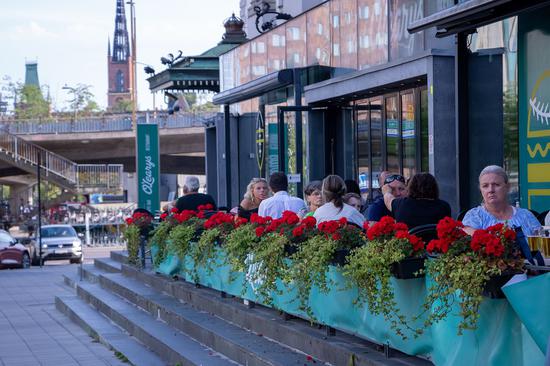 People dine at a restaurant patio in central Stockholm, capital of Sweden, on Aug. 9, 2020. (Photo by Wei Xuechao/Xinhua)

Despite the Swedish authority's insistence on not recommending wearing face masks in public in the country, a group of 26 Swedish researchers on Saturday suggested that children should wear face masks in schools to prevent the spread of the pandemic, local media reported.

"The Swedish Public Health Agency makes the wrong assessment of children's infectivity," 26 researchers, who are members of the Swedish Science Forum COVID-19, wrote in a debate article on Saturday, quoted by Swedish Television(SVT).

They also reasoned about the fact that the Swedish cases of infection have decreased since the schools closed, and believed that the concern about an increased spread of infection before the start of school, which happens next week, is justified.

"Because children can be contagious, and become seriously ill, and it is unclear today how a mild infection also affects their future health, we should already at the start of school take measures to keep the infection down," they wrote.

The researchers suggested, among other things, that face masks should be worn in schools, that sports should be held outdoors, that meals should be eaten class by class and that group teaching avoided. They also suggested that children in families where someone belongs to a risk group should be allowed to receive home schooling -- and urge parents to provide their children with face masks regardless of (authority's) recommendations.

"It is now, when infection rates are relatively low, that we have a second chance to take control of the epidemic," they wrote.

Last week, Ole Petter Ottersen, president of the Swedish medical university Karolinska Institutet advocated, in a statement on his blog, the use of face masks on the university campus if it's difficult to maintain physical distance before the term start.

"We also recommend the use of face masks in situations where physical distancing may be difficult or impossible to observe. In doing so, we take the stand that the effectiveness of face masks can no longer be disputed."

Sweden has so far counted 5,783 deaths and 84,294 infections in a population of over 10 million. It has neither imposed a lockdown -- even during the peak of the pandemic -- nor asked people to wear face masks in public, quoting a lack of support in research. On its website, the Swedish Public Health Agency, which offers national guidance for the pandemic, writes that the current state of knowledge shows that few children and young people are infected with COVID-19 -- and that school activities have not been shown to be a driving force in the spread of infection.