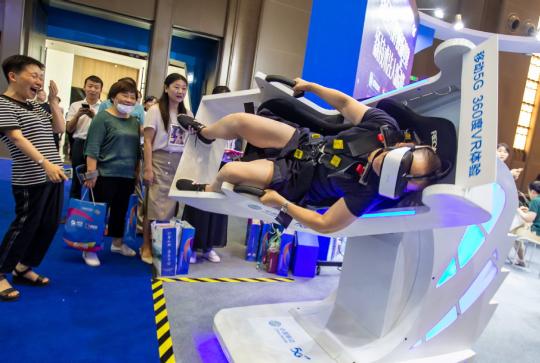 A visitor tries out a game supported by 5G and virtual reality technologies during an exhibition in Nantong, Jiangsu province, in July. ZHAI HUIYONG/FOR CHINA DAILY

China has taken the lead in global 5G development, with nearly half of worldwide investment by the country this year, according to the latest reports.

A newly-launched report by market consultancy Gartner Inc said the country leads the world in 5G development and is expected to contribute 49.4 percent of 5G investment globally this year.

Due to the COVID-19 pandemic, investment growth rates in 5G will be slightly lower worldwide this year but will rebound modestly next year, the report said.

" (The rebound next year comes) as communications service providers seek to capitalize on changed behaviors that are sparked by populations' elevated reliance on communication networks," it added.

The comments echo a recent survey by Swedish telecom equipment maker Ericsson which said that China's 5G development is speeding up this year, which was a contrast to the slowdown of 5G rollout and growing subscription rates in many markets.

Nearly 89 percent of Chinese consumers surveyed believe that 5G is set to play an increasingly bigger role in the future, while 59 percent showed willingness to buy 5G-related products and services, the survey said.

"China has actively promoted 5G construction and local consumers are also holding an open mind to embrace the technology, which laid a relatively solid foundation for 5G development in the country," said Zhang Jin, a researcher from the China Center for International Economic Exchanges. 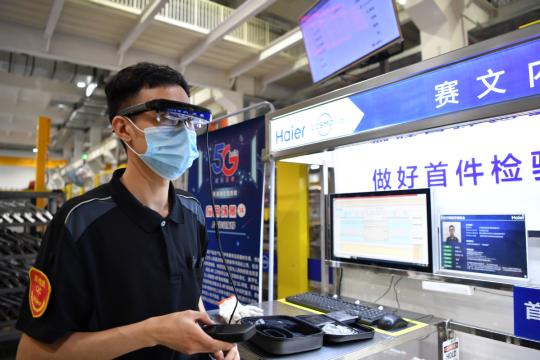 A Haier employee checks products using a 5G-enabled system at a company facility in Tianjin in June. LI RAN/XINHUA

While China remains the world's largest 5G market, Zhang pointed out that the country's efforts in driving 5G-related industrial funds and industrial chain development have also boosted the nation's competitiveness in the sector.

A report by the China Academy of Information and Communications Technology pointed out that China's efforts in 5G commercialization will directly drive an investment of 900 billion yuan this year.

To gear up new growth engines, China also called for new infrastructure construction including 5G, artificial intelligence and the industrial internet. Such efforts are in line with the nation's drive to ensure stability in domestic and foreign investment.

"During the process, AI, together with other core areas of new infrastructure such as 5G, big data and the industrial internet, will integrate much more closely with each other. This will take the digitalization of the nation's traditional industries to a new level," he said.

Gathering of Top Minds to Be Held in Shanghai