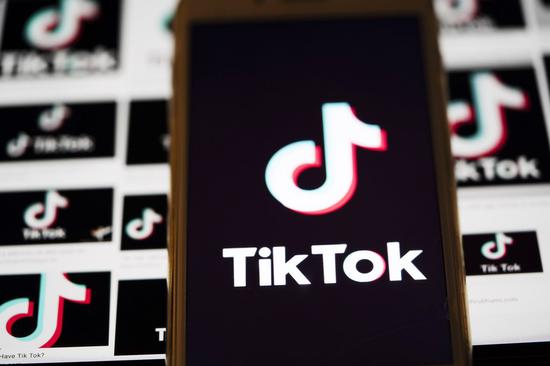 The logo of TikTok is displayed on the screen of a smartphone on a computer screen background in Arlington, Virginia, the United States, Aug. 3, 2020. (Xinhua/Liu Jie)

Martin Shanahan, CEO of IDA Ireland, a state agency responsible for attracting foreign direct investment into Ireland, made the comment following an announcement made by TikTok earlier in the day that it intends to establish a new data center in Ireland, the first of its kind ever to be set up by the company in Europe.

In a message posted on IDA's official twitter account, Shanahan said that the decision has demonstrated the importance of Ireland in TikTok's global operations. IDA also hailed TikTok's decision as "good news," saying that it will create hundreds of new jobs in Ireland.

Announcing the news on TikTok's website, Roland Cloutier, Global Chief Information Security Officer of TikTok, said that "This investment in Ireland, to the value of approximately 420 million euros (499 million U.S. dollars), ...will play a key role in further strengthening the safeguarding and protection of TikTok user data, with a state of the art physical and network security defense system planned around this new operation."

Cloutier said that this new regional data center in Ireland will deliver tangible benefits, including enabling faster loading time that will help the TikTok community to enjoy an even better experience.

Cloutier also said that when the data center is expected to be operational by early 2022, European user data will be stored in this new location.

"Protecting our community's privacy and data is and will continue to be our priority," said Cloutier, adding: "Today's announcement is just the latest part of our ongoing work to enhance our global capability and efforts to protect our users and the TikTok community."

According to Cloutier, TikTok set up an EMEA (Europe, the Middle East and Africa) Trust and Safety Hub in Dublin at the start of this year.

Since then, TikTok has rapidly expanded its Dublin team which is continuously enhancing the strategies, policies and processes designed to keep people on TikTok safe, he said.

TikTok's hub in Dublin initially planned to recruit 100 employees by the end of this year but the figure was later increased following a decision made by TikTok in late June to move privacy oversight of its European users to Ireland, according to The Irish Times, a daily English newspaper in Ireland.